April 20th . 2008
In Kuwait Dadi inaugurated a third Centre.  Dadi was also received by The Trustees of the Grand Mosque and Under Secretary General of Religion.  It was a very beautiful encounter.  Dadi shared the value of peace and the awareness of one family and the Under Secretary General appreciated enormously the work that was happening through the Brahma Kumaris.  It’s the first time that the Government has recognised the activities of the BKWSU in Kuwait, so it was a very important meeting.

In the afternoon Dadi was welcomed by Sheikh who is the son of the President of Kuwait.  The meeting was at their farm-house.  The Sheikh had laid a beautiful feast with so many deserts, fruits, fresh fruit drinks/juices.  The Sheikh is a very lovely and sincere person who has a lot of love for India and has a hobby of collecting artefacts made of the different types of gem-stones  – rubies, emeralds, topaz etc.  He often goes to India and specially makes a point to visit the temples and having so much love for India.  He was greatly honoured to host Dadi Janki and wanted to make tea for her specially.  He very much believes in values and leading a life free from negative habits, doesn’t smoke, doesn’t drink.  Dadi specially encouraged him to take on the task that God is giving us as we are His children and we can do wonders following His guidance. About 8 Brahmins also had the pleasure of the Sheikh’s company..

This also again means that the Government is now aware of the BK activities but also now that the Sheikh very much supports the activities.  There were also meetings with other dignitaries.  It seems that Kuwait is now ready for Baba’s message.

There was a public programme in which 800 souls heard Dadi with a lot of love and attention.  It was a magnificent hall and the topic was ‘The true secret of wealth’.  Since the first students and the instrument in Kuwait have very high level connections, each gathering that took place was of very high calibre people and many seemed to have come very close and are ready to help in Baba’s work.  There also was a interview with one of the main TV channels with Sister Jayanti.

The Ambassador of India was present at many of the meetings and his representative the Cultural Secretary came to all the classes.  Dadi’s arrival and departure was through the VIP lounge arranged by the Indian Embassy.

In Beirut again Dadi’s arrival and departure were through the VIP Lounge and arrangements were made by a close co-operative contact soul since the beginning of activities four years ago.   There was retreat at a beautiful hotel which was originally a palace high in the mountains for a gathering of 100.  Some were Brahmin souls from neighbouring countries and others were local students and contact souls.  Within a space of 24 hours they had several classes from Dadi , Amrit Vela and also World Mediation Hour.

The atmosphere in Beirut is still one of great tension.  It is currently one of the flashpoints in the Middle East and people are desperate for peace.  So once again the response was a very beautiful one.

The most significant part of the trip was a renowned Arabic opera singer Hiba Al Kawas, known throughout the region.  She turns out to be 36 years old, still single and very focused on expressing her love for God through her songs and music.  Dadi met with her the night before the public programme even though it was very late.  It was a very beautiful meeting in which Dadi really appreciates Her love for God.

Apparently when she was born, her mother had a vision of angels and knew that this child was to be a special messenger.  All the Arabic papers carried news of the programmes because of Hiba’s involvement.  The programme took place at UNESCO palace in their beautiful auditorium.  The gathering deeply appreciated Dadi’s message of love and peace.  Hiba very warmly introduced Dadi within the gathering and of course her songs and poetry moved the audience deeply.  Dadi was interviewed by two of the main television stations for a message just prior to the public gathering.

So in a very short space of time service on many different levels happened.  It really seems that the Centre in Beirut is now very solid with a very strong group of students supporting it. 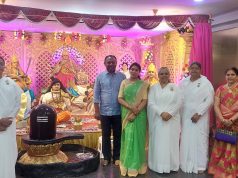 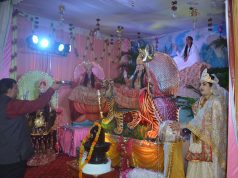 B.K.Bhagwanbhai In India Book Of Records For Service In 5000 Schools & 800 Jails

THE WORLD RENEWAL FOR AUGUST 2019 ISSUE