Home UK Tao of the Traveller

Around 30 people, including 20 media and IP contacts, attended a private screening of Baba’s new film Tao of the Traveller in the Conference Hall at GCH on Wednesday 16th April.  The film was shown after a warm welcome from Sister Maureen and brief introduction by Robin Ramsay. With Tamasin Ramsay as the Traveller, the voices of Clarke Peters and Lucinda Drayton and the most exquisite and touching scenes from the natural world, the film beautifully and simply introduces the viewer to the ‘seven keys of enlightenment’ – in effect: soul, God, the Home, karma, the cycle, the 8 powers and sharing knowledge.

After the film Brother Robin and Brother Prashant (HIM Studios, Gyan Sarovar) shared what had inspired the making of the film and their experiences of the process – “the challenges and the miracles”.   Enthusiastic audience members wanted to know how they had managed to find and film such extraordinary scenes from nature – landscapes and animals.  One suggested that it was as if “nature was fitting in with the story.”  Another commented on the “very meditative rhythm of the whole film.”  Brother Prashant shared how “it was as if some Divine power was at work; we would think about certain things and they would just happen.”

In thanking and congratulating the Brothers on such a beautiful and authentic creation, Sister Maureen commented how it demonstrated the power of a strong vision.  She then closed the evening with a short meditation.

On Saturday 19th April, an 330 people attended a public screening of the film in the auditorium.  As they were leaving, people commented on how “inspired” they had been, that these ideas “needed looking into” and that they were keen to see it again. 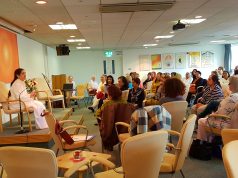 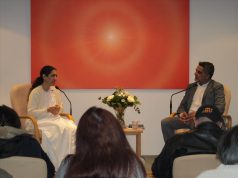 London- A Conversation on Culture and Conscience with Sis. Maureen, GCH and Cllr Muhammad Butt, Leader of Brent Council 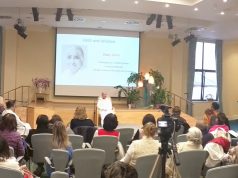